Hundertwasser is one of the 20th century's most celebrated European artists.  His works were exhibited in museums in many countries on five continents.

As of the early 1950s Hundertwasser was concerned with architecture, and consistently pursued his goal of a more human architecture in harmony with nature. Hundertwasser was a forerunner of the green movement. He committed himself to the preservation of our natural surroundings and a life in harmony with the laws of nature. He wrote numerous manifestos and designed and donated posters in support of the protection of nature; against nuclear power, for the saving of the oceans and the whales and for the protection of the rainforest, to name only a few examples. Much of Hundertwasser's contribution to architecture (green architecture) as well as to ecology is of everlasting validity.

In time of mediocrity, of aesthetic emptiness and the soullessness of prefabricated goods, Hundertwasser's endeavour for the hidden human longing for variety and beauty in harmony with nature is manifested. In accordance with his philosophy, "Beauty is a Panacea", Hundertwasser wished to restore beauty and romanticism to everyday life.

Hundertwasser died on February 19, 2000 while on board the Queen Elizabeth 2 on his way back from New Zealand to Europe. In accordance with his wishes, he is buried in harmony with nature on his land in New Zealand, in the Garden of the Happy Dead, under a tulip tree. 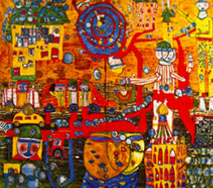 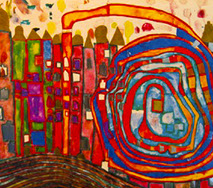